On April 14 the US Bureau of Reclamation announced that, as a result of low flows into Upper Klamath Lake, its Klamath Irrigation Project would not be able to meet all 2021 irrigation water needs. Reclamation said it will maintain a minimum water elevation in Upper Klamath Lake to aid endangered Lost River and Shortnose suckers. Water was also allocated for some federal irrigators but at a rate far below what they desire.

Reclamation also announced it would not provide flushing flows to the Klamath River. Biologists say a spring pulse flow is needed to flush disease organisms from river gravels in order to mitigate the Klamath’s chronic salmon diseases epidemic. Natural salmon diseases have become epidemic in the Klamath, Scott and Shasta Rivers as a result of poor water quality and low flows.

As a result of these decisions, the Irrigation Project's main delivery canal, the A Canal serving the lower Lost River Basin, has not been filled and most juvenile salmon descending the Klamath River are dying before they can reach the Pacific Ocean.

In response to Reclamation’s announcement, the Klamath Water Users Association (KWUA) issued a press release claiming that Reclamation’s decision would cause “devastation,” including “dust storms” and calling Reclamation’s announcement the “worst day in the history of the Klamath Project.” The Yurok Tribes also issued a press release claiming that all interests are suffering. Along with the Karuk Tribal Council, the Yurok Tribe called for emergency federal assistance for all Klamath communities impacted by the water shortage.

Federal and state assistance provided in 2002, including a $50 million fund in the 2002 Farm Bill and special assistance from California taxpayers, made it possible for many federal irrigators and at least one irrigation district to sink deep wells and outfit them with irrigation pumps. The development of groundwater for irrigation since 2002 has made it possible for many federal irrigators to continue farming as usual when Klamath River water is not available for irrigation.

Knowing this history, I decided to travel from my home on the Lower Klamath to the Upper Basin. I wanted to see for myself how agriculture was being affected by this year’s cutback of Klamath River water for irrigation. Here’s what I found:

While a few fields lie fallow, most agricultural lands located within the federal Klamath Irrigation Project are being farmed and irrigated this year. Within the Tulelake Irrigation District, for example, groundwater is being extracted from private and district-owned wells and supplied to irrigators who were planting potatoes and onions and taking the fist cutting from deep green alfalfa fields when I toured the area. Grain is also being grown, especially by irrigators within the Klamath Drainage District who are taking Klamath River water via the North Canal which the District owns. The North Canal takes water from the Klamath River below Upper Klamath Lake.

Below are a few photos illustrating conditions within the federal irrigation project on June 8th and 9th. Additional photos can be accessed at this Dropbox link. 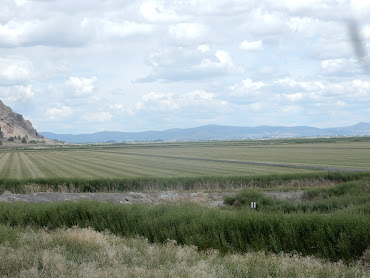 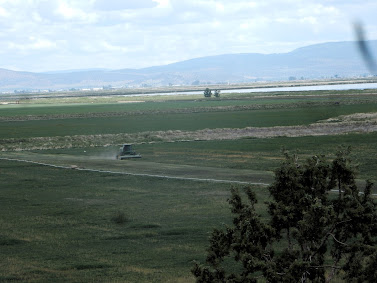 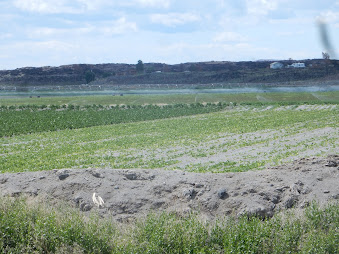 I think these are a current and a harvested horseradish field with irrigation in progress beyond them. 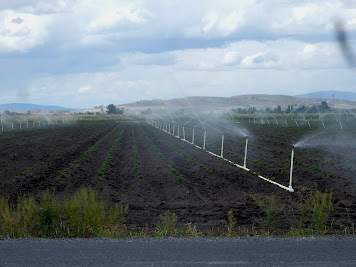 While I was in the Upper Basin I had lunch with a federal irrigator whom I have known for many years. He confirmed what I had seen driving the Tule Lake and Lower Klamath agricultural fields: while there are a few irrigators who will not be able to farm this year, most federal irrigators are able to farm normally using the irrigation wells paid for by federal taxpayers. The majority of the farms that are not irrigating are located on the southeast portion of the Klamath Irrigation Project, including around the town of Malin and east of the town of Tulelake. These are areas of smaller farms located on less productive soil.

Some individual irrigators and the Tulelake Irrigation District are using federal government owned canals free of charge to deliver the groundwater they are selling to other irrigators. While a few irrigators will not have access to irrigation water, agricultural production and the local economies that depend on that production will be only minimally impacted.

The conditions I found on the ground conflict with media reports about impacts resulting from the lack of Klamath River water for irrigation. Newspapers, radio and TV stations have repeated claims made in Klamath Water Users Association press releases. When examined, it turns out KWUA’s impact claims and reports on those claims are gross exaggerations.

Reporters and editors failed to fact check to verify federal irrigator claims. That should change. Those who claim to report first hand on Klamath River Basin conditions should get out on the ground to see conditions for themselves or check claims made by all parties using multiple and trustworthy sources.

Meanwhile, the Biden Administration, Oregon Senators Wyden and Merkley and Representatives Bentz and LaMalfa have fallen over each other rushing to promise emergency assistance to federal irrigators. The Administration and these politicians apparently also failed to fact check conditions on the ground or to even notice that the assistance they legislated for federal irrigators just a few years back has yet to be fully expended.

I can now summarize the factual situation: Federal irrigators made grossly exaggerated claims about what would result from the lack of Klamath River water for irrigation. The media repeated those claims without checking to see if they were true. Oregon politicians rushed to promise and the Biden Administration to provide emergency assistance to federal irrigators without sending out staff or checking multiple sources to verify the claimed need for emergency assistance.

I believe the time has come to get real about impacts and get moving on solutions. It is time for irrigators, tribes, fishermen and restorationists to stop looking for the next emergency payment and the next taxpayer grant and instead to think hard about what can be done to balance Klamath waters. It is also time for the Oregon and California Congressional Delegations to provide real leadership. They  should immediately schedule hearings focused on solutions and then use that testimony to craft bi-partisan legislation that will balance Klamath waters.

It is time to break the cycle of recurring conflict over water and the emergencies, real and manufactured, which that conflict creates. I’m available to clarify this testimony and to explore what a real solution will include.