Negotiating a Klamath Water Settlement based on what the River needs: Analysis and Commentary by Felice Pace

Will the Biden Administration soon bring parties together to seek settlement of the Klamath River Basin's #1 water conflict? These repeated water conflicts are debilitating. Dam removal is good but won't alone restore the Klamath River and Klamath Salmon. That's why we ought to give settlement our best shot while the Biden Administration is in office.

A desire for settlement does not mean abandoning the objective of securing for Klamath River the flows that the River needs. Settlement must assure not just the survival of Klamath Salmon but also their recovery to levels that support, at minimum, tribal subsistence fishing. Any viable settlement will deliver the flows and water quality needed to restore and maintain the healthy river ecosystems on which healthy salmon depend. 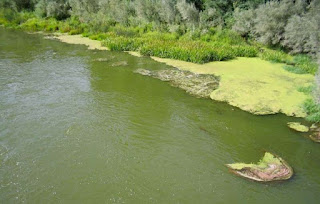 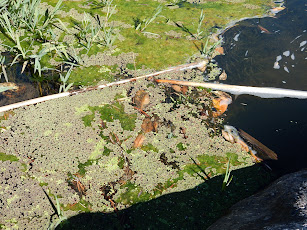 Collections of algae on the Klamath River near Fort Goff and Beaver Creek.
Algal Mats are an indicator of seriously degraded aquatic ecosystems.

But there is a problem. We don't really know what flow levels are needed and when they are needed. The only Klamath River flow study was limited to start with and is now obsolete; it alone cannot indicate the flows which the River needs to support healthy stream ecosystems and the robust fisheries that depend on those ecosystems.

I've suggested to Biden Administration leaders at the Interior Department that they immediately allocate the funds needed for a basin-wide flow assessment. Alternately, Congress could take the initiative by appropriating the funding and directing the Administration to complete a fairly rapid basin-wide flow assessment, including recommendations for coordinated flows from the Upper Basin, Shasta and Scott. That would be a strong step toward the One Basin Management that has long been a goal for River Advocates, including a few who are no longer with us.

A rapid basin-wide flow assessment will consider and integrate flow studies from the Shasta, Scott, Upper Basin and Lower Klamath and use that integrated information to recommend interim integrated flows not only for the Klamath, but also for the Shasta and Scott River. The assessment would look toward coordinated, state and federal flow management. It would also define a path to final Klamath River flow recommendations based on the best available science and information.

While we don't yet know the precise flows needed post dam removal to restore Klamath River aquatic ecosystems and fisheries, it is crystal clear that in most years there is not enough Klamath River water to satisfy all needs. Furthermore, climate change is expected to further reduce the amount of water available to meet flows, irrigation and domestic water demand.

Irrigation amounts to about 80% of total demand for Klamath River water, while water supply for homes and businesses is about 20% of demand. Because it is only 20% of water demand and because providing water for family drinking and domestic use by law must be our highest priority, balancing water demand and supply can only be achieved by reducing the amount of water diverted for irrigation from the Klamath and its tributaries. Many millions of taxpayer dollars have already been invested in projects to increase on-farm irrigation efficiency; no more water can be saved in that way.

Under these conditions there is only one solution. In order to overcome conflicts that will just keep getting worse if not addressed, we must reduce the amount of water taken from our rivers for irrigation. The equitable way to do that is for the federal and state governments to purchase and retire water rights from willing sellers. Just as flows from the Upper Basin, Shasta and Scott should be integrated, so too reducing irrigation demand should include federal and state-regulated irrigators in the Upper Basin, Shasta and Scott. 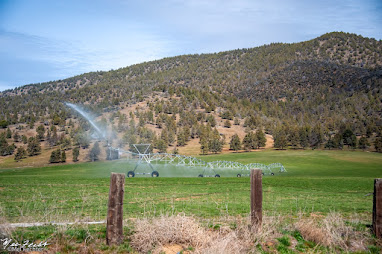 Integrating and coordinating flows from the Upper Basin, Shasta and Scott will spread the impact of reduced irrigation among all irrigators and not place the burden only on the Klamath Irrigation Project's federal irrigators. Spreading the pain of reduce irrigation equitably is not only the right thing to do, it will make settlement more attractive to federal irrigators who wield considerable political influence.

Know how to negotiate

Those joining negotiations on behalf of the River must not enter negotiations unprepared. They must know going in both their initial position and where their bottom lines lie. And they must insist that Klamath River flows be negotiated first. Unless there is agreement on flows, it makes no sense to negotiate other items.

Above all else those negotiating on behalf of the River must not make the mistake of accepting inadequate flows as we saw with the KBRA Water Deal. Flows the KBRA would have locked in via federal legislation subsequently resulted in the death of over 90% of juvenile salmon migrating down the Klamath River before they could reach the Pacific Ocean. Clearly, KBRA flows were not adequate for salmon recovery.

Who should be at the table?

I think the list of interests participating must be expanded. For example, Trout Unlimited, Cal Trout and American River are conservation organizations with specialized interests. Negotiations should include at least one environmental organizations that champions a broad array of environmental concerns. Also, two of the Basin's six federal tribes were excluded from KBRA negotiations. The Quartz Valley Tribe and the Resighini Rancheria should be included this time.

During May of 2019 the Yurok Tribal Government formally recognized the Klamath River's personhood. As a person, the River deserves to be in the negotiations. But, as the KBRA demonstrated, tribal and specialized environmental organizations have a variety of interests and, as a result, can not be relied upon to adequately represent the River's interest. But who can represent the Klamath River's interest?

There should be a team of people in any future negotiations whose sole focus is the River's interest. Because it was the Yurok Tribe which endorsed the Klamath River's personhood, perhaps the Yurok Court would be the proper body to select and empower a team of individuals to represent the River herself. 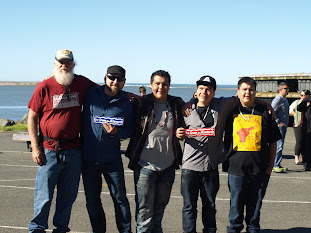 Any successful negotiation involves give and take. All interests must get at least some of what they want and need. But there must also be bottom lines. Here are a few thoughts on bottom lines for the Klamath River.

If the Klamath is a person then it is a person beset by disease and desperately in need of treatment. The only therapy that will work is allowing adequate flows that meet water quality standards to pass down from numerous sources, through our agricultural valleys and on to the river canyons below and, ultimately, the ocean. 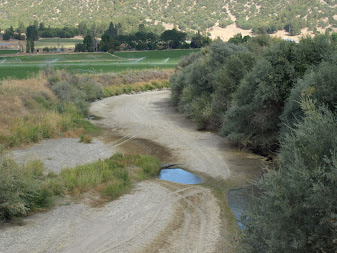 Some irrigation interests claim that any water allowed to flow to the ocean is wasted. They are wrong. Every one of our River's ecosystems, from the headwater wet meadows where they begin down to the estuary and the ocean, needs to be healthy for our River and Klamath Salmon to be healthy. Healthy stream ecosystems depend on adequate flows and water quality that meets standards.